Replacing the Engine on a Troybilt Tuffy Tiller

Ok, so this is the second engine replacement article in a blog that supports a website design company.  As I said when I began this blog, “I may also post something on some random topic.”  This is another of those random posts.

My Tuffy tiller is 18 years old and I’ve been having trouble with the engine for several years.  Last time I took it in for repairs it cost around $80 and still didn’t run very well.  Most recently it has become impossible to start.  Whatever the issue is,  I’m sure it would cost at least $80 to fix it again, without much hope that it would last very long.  After replacing the engine on my wheel line mover,   I guess I was in the mood for replacing engines.  Here’s what I did . . . 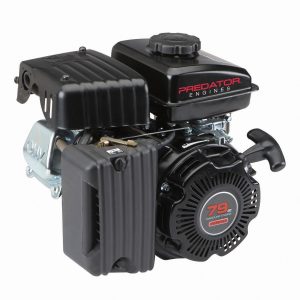 Since the Predator engine from Harbor Freight worked so well on my wheel line mover,  I studied their website for an engine that would work on my little Tuffy tiller.  Among the comments on their 3 HP (79cc) horizontal shaft engine was one where the writer said he used it to replace the engine on a Tuffy tiller and it only took 10 minutes as the engine dropped right in. That sounded good to me so I went down and bought the engine.  It cost $90 without any discount.

Our local store had several in stock – apparently these engines are popular for tillers, blowers, water pumps, generators and whatever machine might need a 3 hp engine.  I decided not to get the $35 two-year full replacement warranty – that may or may not have been a good decision.

Removing the Old Engine and Installing the New

At this point complications arose . . .

The old engine has a 3/4 inch diameter shaft and the new engine has a 5/8″ diameter shaft.  None of the fittings on the old shaft would work on the new shaft.  That included a washer, a spacer, the drive pulley and the attaching bolt.  Beyond that,  the new shaft is a bit longer than the old shaft.  Fortunately the 3/16″ by 1″ key that ties the shaft to the pulley would still work. The idea of a 10 minute install evaporated as I went shopping.

Washers with a 5/8″ hole weren’t hard to find, so I bought a couple.  After visiting a few stores,  I found a 2-1/2″ outside diameter drive pulley with a 5/8″ bore at an industrial supply place.  That pulley is larger than the original because the shaft is smaller and we don’t want to put in a different length belt. 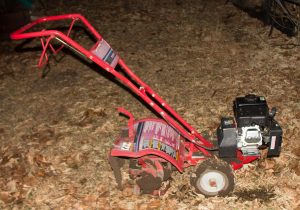 The control cable pulls on an idler pulley that presses against the belt thus engaging the engine.  There was quite a bit of adjustment in the control cable, so I wasn’t too concerned about the exact pulley size I would need. This engine has a throttle that can be adjusted.  While a different pulley might mess with the gear ratio and make the tiller move too fast or slow,  adjusting the throttle can compensate for that.  The throttle lever also has an adjustable stop, so once it’s properly set, it need not be moved again.

The final piece, the spacer, was more difficult to find.  I ended up visiting our local steel supply shop where they had a long pipe with what looked like a 5/8″ interior diameter.  They were nice enough to cut off a piece of the needed length (1-1/4″) for no charge.  I thought I might need to drill it out with a 5/8″ bit,  but it was exactly the right inside diameter – all it needed was some burrs filed off the end.

With all the parts in hand,  it was simple matter of sliding the spacer and the pulley on the shaft, installing the key, adding a 5/8″ washer on the end, a smaller washer (to fit the bolt and extend far enough to hold the other pieces in place) and bolting it all together.  There was plenty of play in the belt, so it slipped right over the pulley.  Finally,  I bolted the plastic shroud to the metal bracket I had already installed on the engine.

I added the oil and gas and the engine started on the second pull.  I drove the tiller to the garden and gave it a try.  At first, the tines wouldn’t move in the dirt.  This was simply because with the modifications,  the belt wasn’t quite tight enough to take any load without slipping.  As I already noted,  there was plenty of play in the cable adjustment. I just tightened up the cable using the adjusting system, near the tiller’s handle, so the tines would move under load, but stop when the control lever was released.

All in all the process went well.  I did find that they are serious about letting this engine run five minutes before putting it to work.  Until it’s warmed up,  it will not run smoothly and has a tendency to die if load is added too quickly.  After the five-minute warm-up, it worked great and I got my garden tilled.