Replacing the Engine on a Wade Rain Wheel Line Mover

The original Tecumseh engine on my mover lost it’s magnets in a noisy episode awhile back and I replaced it with a used version of the identical engine for $75. That engine began smoking and generally misbehaving, so I replaced it with a new engine – without breaking the bank.  Here’s what I did . . . 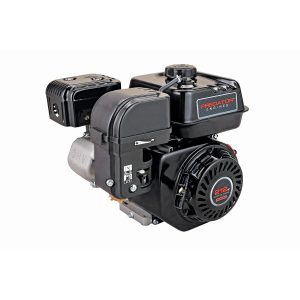 I went looking for an engine that would fit the mounting plate on my mover without any modifications.   The shaft on the engine also had to be in the correct position vertically and horizontally and have the same length and diameter as the original engine.  Plus I wanted an inexpensive engine of the same horsepower.  That seemed like a tall order, but I didn’t really want to modify either the engine or the mover to make this work.

My search led me to the Predator engines sold by Harbor Freight.  In particular,  the 6.5 HP (212 cc) version with a horizontal shaft exactly matched my needs.  The list price is $119.99, but my store happened to have a return that was in an unopened box, so I ended up paying $96 for it.  The widely available 20% off coupons do not apply to Predator engines.

Our local store had several in stock – apparently these engines are popular for go carts.  Given that it is a cheap engine, and not knowing how it might perform,  I paid an additional $50 for a two-year, full replacement warrantee.

Removing the Old Engine and Installing the New

The old engine had a shroud that covered the shaft and the linkage to the reduction unit.  I first removed the two bolts and the shroud.  That left the four mounting bolts and an easy removal of the engine.  There were two pieces from the old engine that were needed.  First, I detached the female flange on the shaft that is attached to the reduction unit via the flex coupling using a puller tool.  Next,  I removed the pulley assembly that directs the starter cord in the proper direction.

Preparing the new engine meant first flattening the plate on the pulley assembly to match the contours of the new engine and installing it to the housing under the throttle with a couple of metal screws.  It was necessary to remove the handle from the starter cord, run the cord through the pulley and reinstall the handle.  The female flange was pressed, by hand, over the shaft with the locking key in place and the shroud was bolted onto the new engine using holes that were in exactly the right place.

Next,  the new engine dropped over the existing holes in the mounting plate and was bolted down.  The female flange was adjusted into position and locked down.  Finally, I added the recommended oil (SAE 10W30)  and fuel (unleaded gasoline mixed with Sta-Bil fuel stabilizer). With everything set,  I pulled the starting cord slowly to move gas to the cylinder and the engine started.  That’s right, first pull.  Not only that,  it’s started on the first slow pull every time since then. 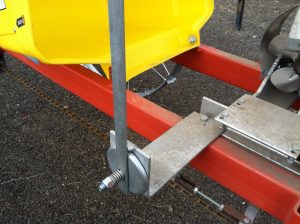 In my case the original transmission control lever came across relatively high in the mover.  That was fine for the shape of the original engine,  but it wouldn’t work with the new engine because it bumped into the carburetor.  I tried bending it,  but that didn’t work.  While thinking I would have to cut off the mount and reposition it, it occurred to me that the new mover at our local irrigation supply shop had a different lever arrangement. That lever mounts fully outside the mover cover and runs below the engine, thus solving the problem. The local irrigation supply store had one in stock, so I bought and installed it.  The photo was taken at the store as an aid in installing the lever on my mover – the included instructions were pretty poor.  Click on the photo to see a full-sized version where you can clearly see the adjustment linkage under the mover frame and the arm headed toward the reduction unit.  The silver plate on the far right, center is the engine mounting plate.

The only difficulty in the removal process for the old lever was getting it free of the reduction unit.  The mounting bolt came out easily, but it took some careful and persistent tapping with a hammer to gently break the old lever assembly free of the unit.  Surprisingly,  the mover chassis had a hole (and bolt) in exactly the right place to mount the lever assembly (see photo) and installation went without a hitch.  The new arrangement puts the lever adjustments right up front (see photo) so it was easy to get the lever adjusted so that neutral was perfectly centered.

All in all the process went well and the mover runs much better than it ever has.  While Wade Rain sells Honda engines for these things,  I was able to save several hundred dollars on the engine and complete the entire project for something like $200.

I’ve now used this engine for three seasons and it still works well.  No need for the $50 warrantee I bought.  I did run into an issue in the third season of water getting into the engine somehow.  This tends to lock the cylinder and it becomes very difficult to pull the starter cord.  It takes a lot of messing around with the starter, involving pulling the cord slowly without breaking it.  Eventually the engine breaks loose and starts up after getting the water out. That takes a lot of pulls! The solution is a piece of inner tube over the engine, under the hood, when it’s not running.  I’ve had no problem with the engine since adding that feature.  The transmission/reduction unit is another story.  It is leaking fluid and apparently needs new seals.  My next project is to take it apart and see if I can do anything with it.  They do carry those units at the local irrigation store, so at least there is a backup.  Unfortunately they are quite expensive.  Perhaps I’ll have another story to tell next spring.